Shkopich Enviro was originally founded as Lamon Disposal in 1972 by Terry and Beverly Lamon and operated as a salvage yard.  In 1982, Lamon Disposal was awarded the contract to provide back alley solid waste collection in Meadow Lake. Front load and Roll off services were brought into service in 1986 which provided waste disposal solutions for local and rural areas of North West Saskatchewan.  In the mid 1990's, the used oil/filter recovery program began, servicing Meadow Lake and surrounding areas.  1997 was an exciting year, Lamon Disposal was the first company in Saskatchewan to provide 100% curbside waste pick up services, with the Town of Meadow Lake being the first to take advantage of this great service!

For Lamon Disposal, 2013 brought the introduction of the Single Stream Recycling division, this satisfied the growing customer and community demands for environmentally friendly recycling.

2015 was a momentous year with Lamon Disposal being purchased by Shkopich Enviro.  In 2016, an on-site facility was built to better service the various types of recyclable and non-recyclable materials handled.

Today, Shkopich Enviro operates a fleet of over 40 units and the company is still growing.  We are achieving our success through the effort and dedication of our employees, and with their commitment to provide good quality service and complete satisfaction to our customers. 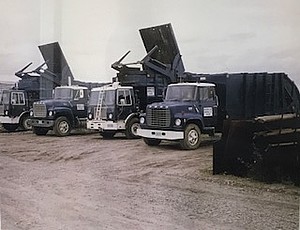